I have never been a big advocate of Walmart. The one by my old house was typically filled with people with far too many children who seems to cough constantly. I know how much money I could save by going there, but not having to go there was worth the $10 extra I paid in groceries per week. There is nothing worse fighting my way through the people who think no one else exists and park their carts perpendicular in the aisle just enough that no one can move through, being coughed a gazillion times, and then seeing the light at the end of the tunnel, only to be discouraged by a 17 minute check out time with all of the same people that irritated you along the way.

I will admit now that it is not all Walmarts, just the one by my old house. Since we moved to Suwanee, I have been going to the Walmart quite frequently. In fact, I think it is going to be where I do my grocery shopping. The Kroger by me is far to hard to get out of. It requires waiting for an opening to get across three lanes to the turning lane just to be able to make a U-turn to go in the direction of my home. The Publix by me is nice, but quite a hike. I will likely go there once a week because the mail out $5 off of $30 every week. I will not pass that up, but the rest of my grocery shopping will be in Walmart.

Anyway, I promised a tip, and here is it: WALMART MATCH ANY COUPON OR ADVERTISED PRICE. I thought I would see if they would match my Super H coupon book prices on the produce which is incredibly cheap. They did!!! I got cucumbers for $0.29/lb, Horizon Organic whole milk for $2.99, broccoli for $0.39/lb, Sriracha for $1.79 for the big bottle, and Morton salt three for $0.99. They had no problem matching the prices. So grab a Super H coupon book or just the flier from the paper and shop away! 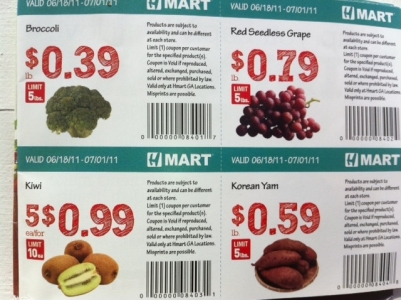