In my late teens and early 20’s, I was quite nomadic. I loved going to the University of Tennessee, but in the middle of my time there, I decided to pack it up and head out west. At times I regret that decision, but I know that it was that decision that ultimately made each event in my life unfold and lead me to Blake.

I had a great time living in Vail, CO. After leaving Vail, I headed back to NC where I got my degree from UNC Wilmington. My new found love for surfing led me to Sunny San Diego, CA where I found a job at The Marine Room
(www.marineroom.com) that will forever be marked as one of the greatest experiences I have ever had.

When I moved to San Diego, it was clear that working in a restaurant was what I wanted to do. I wanted my days to be spent on a 10 foot long, freshly waxed, red, Allison surfboard, made specifically for me by one of the greatest surfboard designers of all times. It quickly became clear that I wasn’t the only one with this idea. Restaurant jobs were hard to come by.

I heard from a friend that there was this wonderful restaurant called The Marine Room that practically sat in the ocean. I was told not to apply because they rarely hire. Well, stubborn ole’ me went anyway. I am so glad I did because I landed the job, created amazing memories, met wonderful, life-long friends and learned more than I could have ever imagined from two of the best chefs in the world: Bernard Guillas and Ron Oliver.

I will never forget the stuff I learned there about food and wine. There was this fabulous dish that had a red quinoa in it. I had never seen or heard of quinoa, so I asked Chef Ron what it was. He explained to me all of it’s nutritional benefits and it’s history. Quinoa is a South American grain that is full of protein and essential amino acids. On top of that, it is gluten-free.

Since leaving the Marine Room, the popularity of quinoa has greatly increased. It is even finding it’s way to the grocery store aisles. The main problem with quinoa is that it is expensive. A small bag of it runs anywhere from $2.99-$8.99 for a 12 oz. portion. YIKES! This is why I am sharing this amazing deal I found. At Costco you can get 64 oz. of Organic Quinoa for $9.99, and it is delicious!! 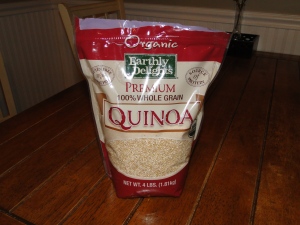