So far one of my favorite things about this blog is when people ask me for ideas. I like the challenge of finding ingredients for what they want on sale and making them into something delightful.

Last week I posted about home grown veggies. One of my friends, Christy, told me that she had so many banana pepper that she was throwing them out before she could use them. First off, I would say compost them. In fact, it was her mom, during my childhood, who introduced me to composting.

I thought for a while about what to make with a plethora of banana peppers. At first, I considered a casserole with a biscuit topping, but no matter how savory you make it, that would still be pepper overload.

So I went in the direction of a relish. The coolest thing about pepper relish is that it stays good for a while. Generally when anything is cooked in vinegar, it will last a lot longer than you would think. 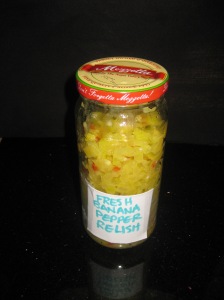 All it takes to make a pepper relish 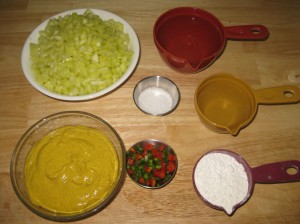